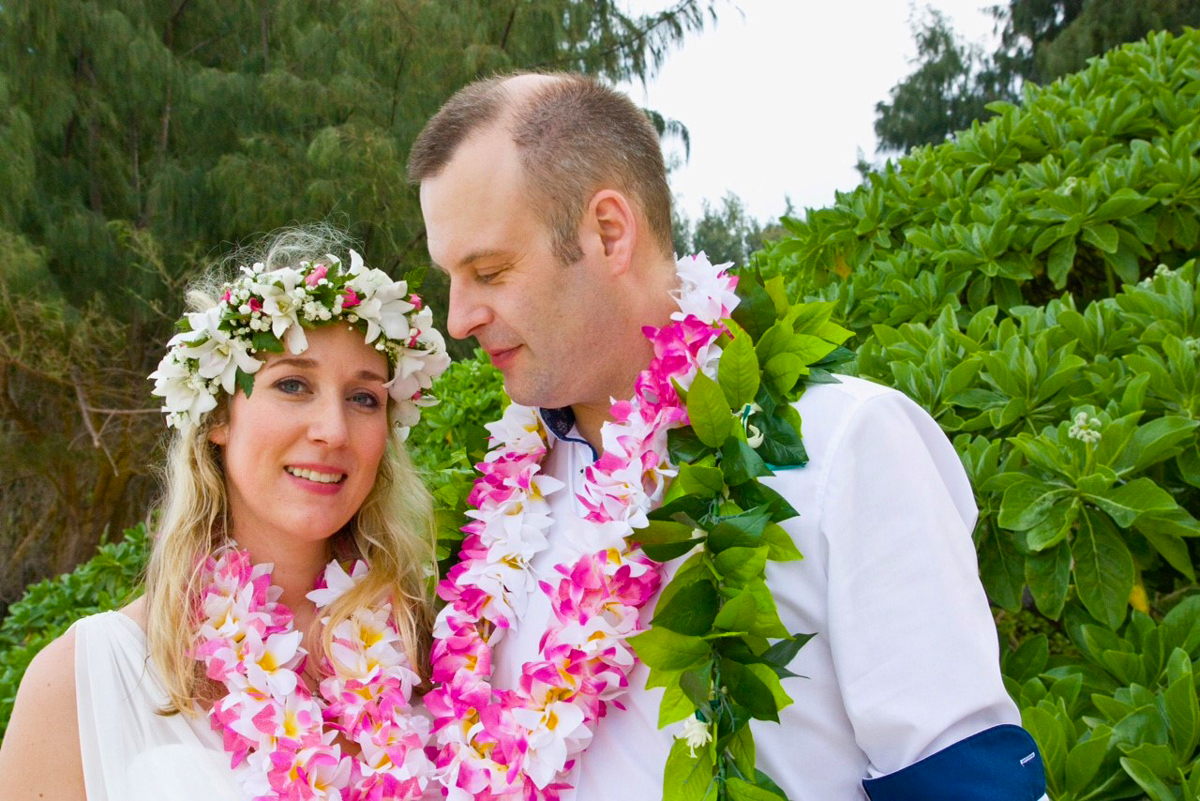 Just eight days after a sudden miscarriage, Sinah and Olli exchanged vows before family and friends in an intimate beach ceremony.

Finding the Luck in the Bad: A German Couple’s Experience with Pregnancy Loss while Visiting Hawaii

Sinah Meier and Oliver Fuchs marked their one-year wedding anniversary by revisiting the Windward Oahu beach where the two said their vows in March 2017.

The day was picturesque – a cloudless blue sky accentuated the crystal-clear water, and a light breeze broke up the heat from the early spring sun.

The setting was perfect for the happy celebration. All that was missing was a rainbow.

But just as you can’t have a rainbow without rain, the return trip to their destination wedding location held a bittersweet purpose for the couple.

“It was very important for us to come back because we left our baby here,” says Sinah.

Sinah had been 18 weeks pregnant when she and Olli made the trip from their hometown in Gummersbach, Germany, to Hawaii with their families and friends.

“The day before the flight, my gynecologist in Germany told me everything was fine with me and our baby,” Sinah remembers. “But then on the flight, my legs started to get bigger and bigger every hour because of edema. We thought it was because of the flight, but the next morning, it was worse, and I felt weak, so we went to the doctor in the hotel.”

A physician at the Straub Medical Center – Doctors on Call – Sheraton Waikiki was worried about Sinah’s elevated blood pressure. Thinking Sinah’s symptoms could be due to preeclampsia, she recommended the pair go directly to Kapiolani Medical Center for Women & Children.

“I think she was the first one who made the right decision that day,” Olli says.

Upon admission to the Kapiolani Emergency Department, Sinah was seen by Patty Clayton, RDMS, a sonographer with the Fetal Diagnostic Center who was called in to perform an ultrasound to check on the health of the baby.

“I knew this story wasn’t going to have a happy ending the moment I put the transducer on her belly,” remembers Patty, who has been performing sonograms for more than 40 years. 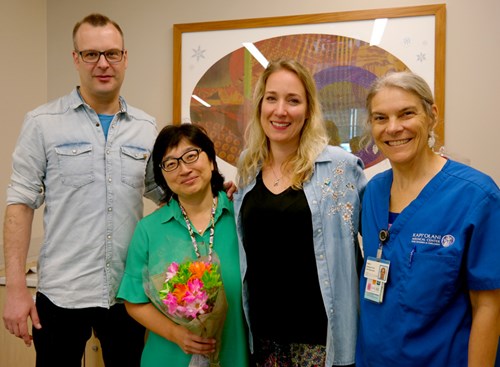 Patty immediately called Dr. Men-Jean Lee, a maternal-fetal medicine physician at Kapiolani, who made the diagnosis based on what Patty had found.

“Patty was saying, ‘Look at the placenta, look at what I see around the heart.’ After speaking with Sinah and Olli and getting to know their story, the pieces of the puzzle began to come together,” Lee says.

Sinah was suffering from a molar pregnancy, a very rare complication characterized by the abnormal growth of the cells that normally develop into the placenta.

In a complete molar pregnancy, there is no formation of fetal tissue. Instead, the placental tissue is swollen and appears to form fluid-filled cysts.

In a partial molar pregnancy, which is the type Sinah had developed, there may be normal placental tissue present, along with abnormally forming placental tissue. There also may be a fetus, but it isn’t able to survive, and usually is miscarried early in the pregnancy.

“I trained at Prentice Women’s Hospital at Northwestern University where we were trained to recognize these types of situations, and this is the second case I have seen in 20 years of practice,” says Lee, noting that if not treated immediately, a molar pregnancy can become cancerous and spread to the liver, lungs and brain of the mother.

“It was a heart-wrenching decision to end the pregnancy to save this woman’s life. It was tough on all of the doctors that day,” Lee says.

After Sinah consented to emergency surgery, a team of specialists was called in to the medical center.

“Everybody came in on call to do her surgery on a weekend, no questions asked,” says Lee. “If we didn’t have the skilled surgeons and specialists available to perform this type of procedure quickly and safely, things could have turned out very differently.”

Sinah spent the next eight days as an inpatient on the fifth floor of the Kapiolani Diamond Head Tower.

Olli, who is a nurse in Germany, was by her side the entire time.

“I can’t describe it. It was a very bad time – we expected something different, but we can’t imagine that the care could have been better anywhere else,” says Olli. “When you’re in a different country, you worry about what the medical care will be like. The way we were treated here, I felt like I wasn’t a patient. I felt welcomed. Everyone was open-hearted. I felt included. We came here and met one of the best specialists for this in the world. That was the luck in the bad.”

Though she needed time to heal, both physically and emotionally, Sinah had not forgotten about their original reason for traveling halfway around the globe to Hawaii. 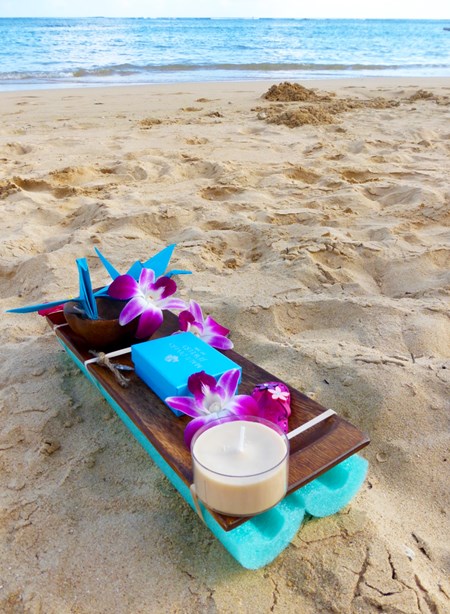 She and Olli exchanged vows on March 13, 2017, on the sands at Waimanalo Beach.

The Hawaiian waters also are where the couple said aloha to their unborn child. In an intimate ceremony at Kahala Beach, the couple released a small makeshift canoe out to sea. Carried on that vessel were flowers, a candle and ultrasound photos Patty had taken of their baby.

“My experiences of last year are a little blurry because of the shock and medication, but I knew that the ending of my pregnancy was inevitable,” Sinah says.

The months that followed also were a whirlwind.

Upon her return to Germany, Sinah needed to see a specialist in Cologne to have a large cyst removed from her ovary, followed by additional treatments to lower her levels of human chorionic gonadotropin (HCG), a pregnancy hormone that indicates persistent gestational trophoblastic neoplasia (GTN).

Persistent GTN, if not treated properly, can develop into cancer.

“I stayed in contact with Dr. Lee, and it was very helpful. It was good to be able to ask Dr. Lee for her opinion. I was happy and astonished that somebody cared for me still,” Sinah says.

That unique bond that was fledged could be felt when the two shared a tear-filled reunion at the medical center during Sinah and Olli’s anniversary trip to the islands.

“I think it’s good to come back to the place where the tragedy took place in order to not repress something. And, of course, we wanted to say thank you, because you took care of me so well! You had the time to explain to us what happened over and over again,” Sinah expressed to Lee and Patty during a luncheon arranged by the medical center.

“When women and families lose babies, each anniversary is very difficult. We wanted to support them during this time, and I’m glad we were able to help turn something sad into something positive,” said Lee, who has photos from Olli and Sinah’s wedding as a screensaver on her office computer.

“There was just something about them, you just hope that they turn out OK,” said Patty. “They were special. I couldn’t forget them.”

Just as you can’t have a rainbow without rain, sometimes you must go through a loss before you gain something greater.

That is the luck in the bad.