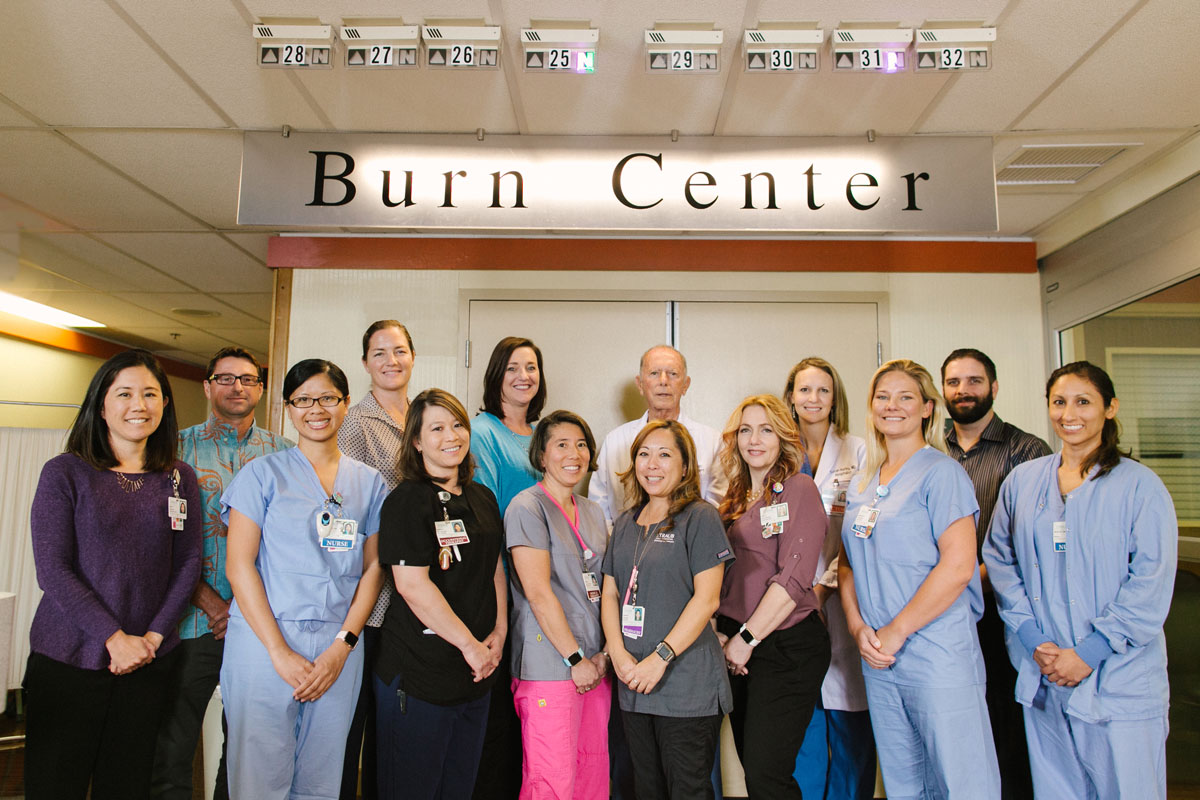 Burns can come in many forms, and the burn spectrum ranges from the easily treatable to the severe.

As the only burn center in Hawaii and the Pacific region, the Straub Burn Center plays a critical role in serving patients close to home.

The team provides advanced burn and wound care for victims of thermal, electrical and chemical burns, as well as severe skin diseases and any condition that requires skin grafting.

Since its inception in 1983, the Burn Center has treated more than 1,000 patients.

Among those patients is Richard Malmgren.

Upon returning home from work one day, Malmgren decided to make stovetop popcorn for himself and his wife, Judie.

Malmgren walked away for a moment while the oil was heating in the pan. When he returned, part of the kitchen was on fire.

According to Malmgren, the oil had sparked and quickly ignited the varnished cabinets above.

“So many things were rushing through my mind,” he says. “All I knew was I didn’t want the fire to reach the attic, so I grabbed the pan with my hand and threw it outside to remove the fire source.”

Malmgren’s quick thinking saved the house but left him with severe hot oil burns on his right hand and arm.

He called 911. The next thing he remembers is waking up in the Straub Burn Center.

There, the specially trained burn team performed surgery and grafted skin from Richard’s thigh to his hand.

“There are a lot of things I can joke about now because my hand is not painful today. Unless I pointed out my scars to someone, they would be unable to tell I was burned,” Malmgren says.

Burn injuries are unique in that they require immediate treatment from a highly coordinated and integrated multidisciplinary team of experts.

“Within 24 hours, the physiological changes brought on by the burned skin become potentially lethal,” says Dr. Robert Schulz, co-founder and director of the Straub Burn Center.

“The bacterial barrier and thermoregulation is lost, and toxic products from the burn lead to vascular changes that require very large amounts of IV fluid. If not provided, the blood pressure will drop to shock levels, and kidney function will be lost. At that point, recovery from the burn injury becomes much more difficult,” Schulz explains.

“Before the Straub Burn Center was established, critical burn patients were transferred to the mainland, further delaying urgent treatment.”

Key in keeping the Straub Burn Center operating for burn patients in Hawaii and the Pacific are community members and partners, such as the Honolulu Firefighters Foundation.

Donations made over the years have assisted with facility upgrades and the purchase of specialized equipment, such as specialized beds, multimedia entertainment systems for inpatients and a new burn tub.

Gifts also allowed the center to expand care from the tub room. Now, they are able to offer daily washes with shower gurneys that can be sterilized more efficiently to provide more comfort to patients.

“Much of this quality care would not have been possible without the generous contributions from local organizations,” says Schulz.

Contributions also allowed for the creation of advanced burn life-support classes for first responders, nurses, emergency physicians and other personnel involved with the transfer of patients to the center.

"I have a hard time imagining how drastically different my outcome could have been without Straub," says Malmgren in reflecting on his gratitude for the quality care he received at the center.

“I simply can’t provide enough praise for the folks at Straub. Hawaii is very fortunate to have this resource.”

For more information about the Straub Burn Center and its services, click here.

For more ways to support Straub or how to make a donation, visit Give2Straub.org.