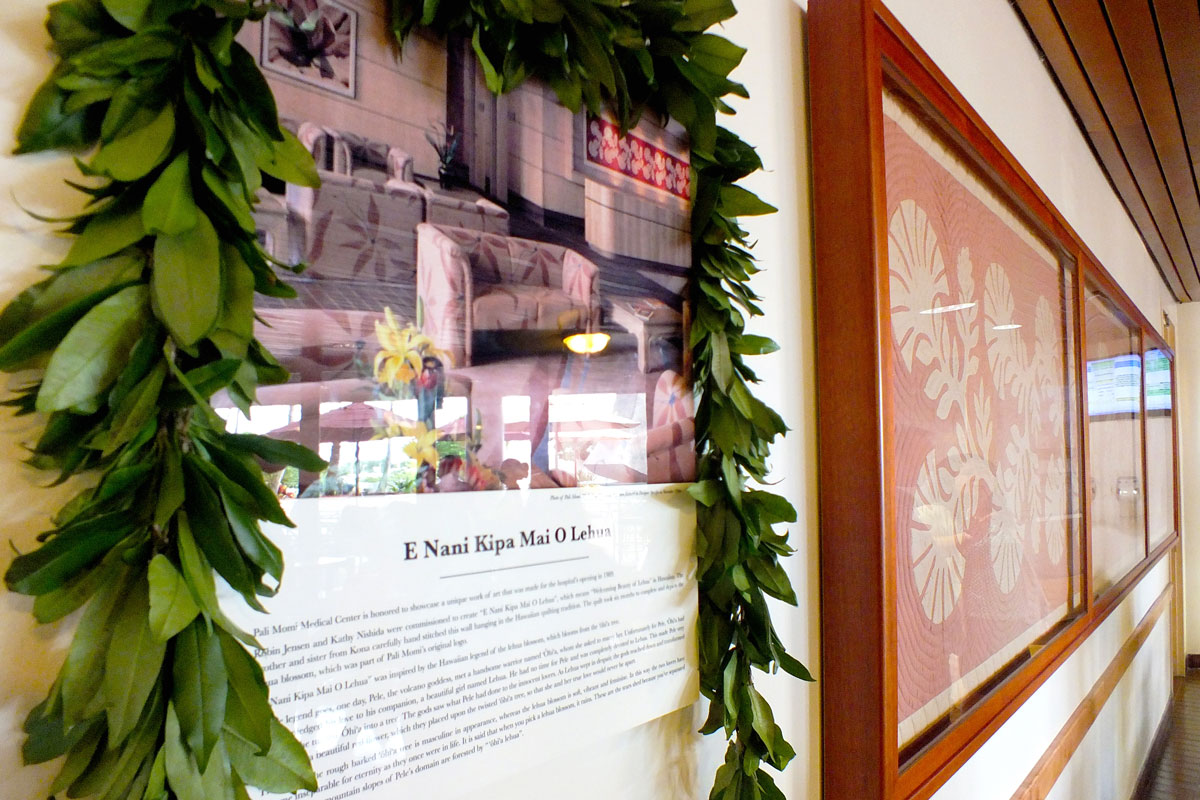 Pali Momi Medical Center celebrated its 27th birthday by reconnecting with a piece of its history.

In an emotional ceremony held July 29, the quilt “E Nani Kipa Mai O Lehua” was returned to the medical center after a few years’ absence.

The quilt was commissioned for Pali Momi’s grand opening in 1989 and was carefully hand stitched in the Hawaiian quilting tradition by Robin Jensen and Kathy Nishida. It had been put away in storage for a few years after renovations were done to the guest registration area, the original location of the quilt’s display.

The quilt now hangs in the Hauoli Court dining room and includes a plaque that reflects the meaningful connection between the quilt and Pali Momi:

Pali Momi Medical Center is honored to showcase a unique work of art that was made for the hospital’s opening in 1989.

Robin Jensen and Kathy Nishida were commissioned to create “E Nani Kipa Mai O Lehua”, which means "Welcoming Beauty of Lehua" in Hawaiian. The brother and sister from Kona carefully hand stitched this wall hanging in the Hawaiian quilting tradition. The quilt took six months to complete and depicts the lehua blossom, which was part of Pali Momi’s original logo.

“E Nani Kipa Mai O Lehua” was inspired by the Hawaiian legend of the lehua blossom, which blooms from the ʻōhiʻa tree.

As the legend goes, one day, Pele, the volcano goddess, met a handsome warrior named Ohia, whom she asked to marry her. Unfortunately for Pele, Ohia had already pledged his love to his companion, a beautiful girl named Lehua. He had no time for Pele and was completely devoted to Lehua. This made Pele very angry, so she turned Ohia into a tree. The gods saw what Pele had done to the innocent lovers. As Lehua wept in despair, the gods reached down and transformed the girl into a beautiful red flower, which they placed upon the twisted ohia tree, so that she and her true love would never be apart.

This is why the rough barked ohia tree is masculine in appearance, whereas the lehua blossom is soft, vibrant and feminine. In this way the two lovers have become inseparable for eternity as they once were in life. It is said that when you pick a lehua blossom, it rains. These are the tears shed because you’ve separated the lovers. The mountain slopes of Pele’s domain are forested by “ohia lehua”.

In addition to the quilt’s unveiling, the anniversary celebration honored employees who have been at Pali Momi since the beginning, including Lisa Chung, who is the medical center’s unofficial “historian.”

Lisa was a key part of the production to get the quilt to Pali Momi and had the quilt in safe keeping until it was framed. The quilt was originally hanging on the wall behind a plexi glass display; when the display came down so did the quilt.

“Let this quilt remind us of the hands that came together to create our signature care … we are part of the fabric that embraces others when they need us most.”