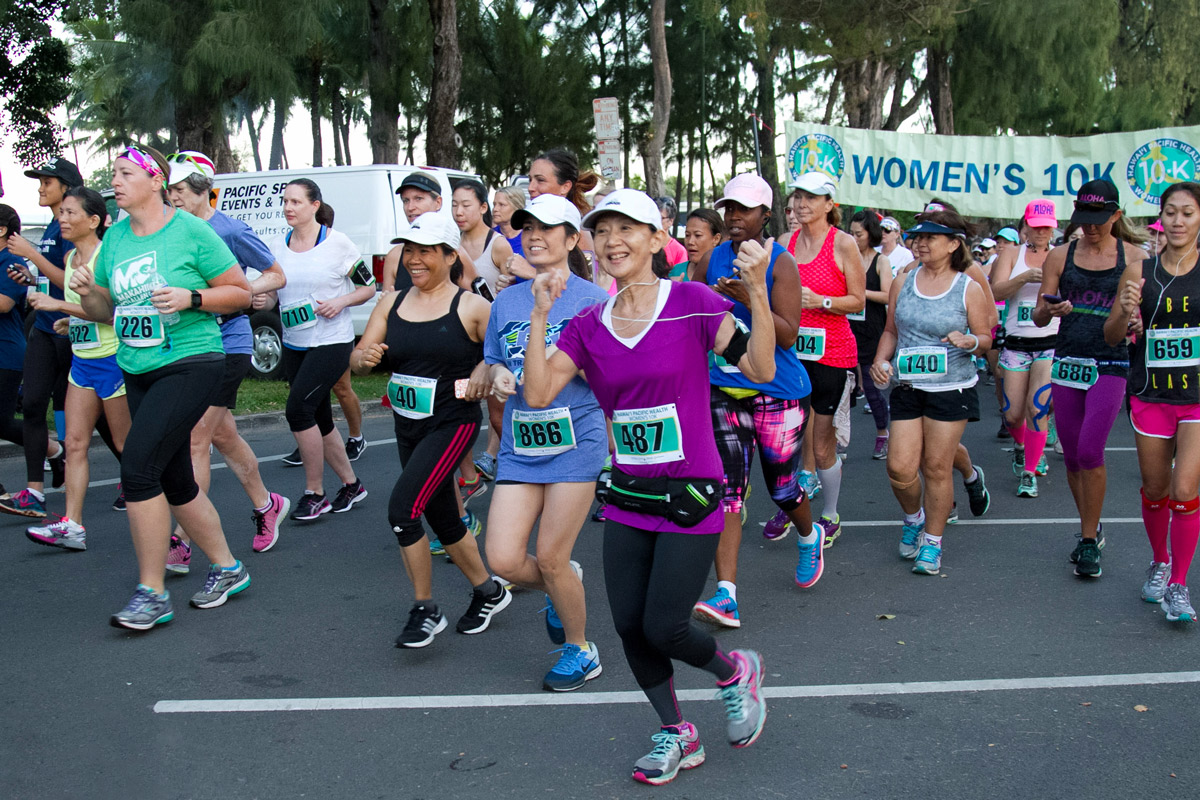 Proudly known as Hawaii’s premier all-women’s running event, this 6.2-mile race has a rich history of supporting women’s health in the islands.

The year was 1977, and a group of female runners decided that it was time for an all-women’s run in Hawaii.

“They were just a group of women who loved running and wanted to share their passion and put on a good event,” said Appointed Race Director Mimi Beams. “We wanted women to be the first across the finish line. We were competitive runners, and the finishing times reflected the nature of the women’s running community at that time.”

With no budget, lots of enthusiasm and a love of running, the inaugural Hawaii Women’s 10K was launched.

The small cadre asked the late Donnis Thompson, the first-ever University of Hawaii women's athletic director, to be the emcee for the event. A pioneer in women’s sports, Thompson was responsible for building the university’s women’s track and field and volleyball programs.

They also enlisted the Mid-Pacific Runner’s Club, the Hash House Harriers and their friends to help set up the event, time it and make food for the post-run picnic.

The finisher shirts – a men’s cut cotton T-shirt – were sponsored by Nike.

“The biggest arguments we had were about the design of the T-shirt,” laughed founding member Dianne Fujimura Choy, noting that there were no such things as women-specific clothing or shoes in 1977.

Once the shirts were agreed upon, they moved on to sanctioning the race course. They settled on a scenic route that started at Kapiolani Park and traveled around Diamond Head and through Kahala before returning to the iconic park.

That route is still used today.

And so it went – the first Hawaii Women’s 10K race was an enormous success with more than 1,500 women participating. The group continued to produce the event for 10 years before passing the torch to Straub Medical Center, which would be the main sponsor of the event for the next 18 years.

Since 2011, the race has been known as the Hawaii Pacific Health Women’s 10K.

Some of the race’s small group of founding members still run today. A few of those pioneers have passed away, but the majority have fond memories of their time together organizing the now-historic event.

“We are grateful to their vision so long ago that has become a tradition on the racing calendar,” said current Race Director KC Carlberg, who is thrilled to continue to help organize this event.

“It is important for women to have a safe and supportive environment to challenge themselves and support each other,” Carlberg said. “Hawaii Pacific Health is a champion of women’s health. The event is important to the community, as it brings women of all levels and all generations together to celebrate health. Women are competitive and deserve to be the first across the finish line, as Mimi Beams believed.”

Women participating in the 40th annual event will not only receive the traditional rose and finisher shirt – now a fashionable piece of race swag designed specifically for women – but upon finishing also will get a commemorative medal.