Keep Your Airways Clear of COPD

COPD, or chronic obstructive pulmonary disease, is a serious lung disease that, simply put, makes it difficult to breathe.

In Hawaii, 4.2 percent of the local population is affected by COPD.

Characterized by a nagging cough and constant shortness of breath, COPD most often involves a combination of chronic bronchitis and emphysema brought on by years of smoking.

Inhaling tobacco smoke irritates the airways and, over a long period of time, destroys the stretchy fibers in the lungs, making it harder for air to move into and out of your lungs. This condition, called emphysema, creates a feeling of breathlessness.

The second part of the COPD cocktail is chronic bronchitis, a condition also caused by long-term smoking. Its calling card is the “smoker’s cough,” which usually is worse in the mornings and in damp, cold weather.

In chronic bronchitis, the bronchial tubes get inflamed and produce a lot of mucus. When too much mucus builds up in the airways, it gets harder and harder to breathe. 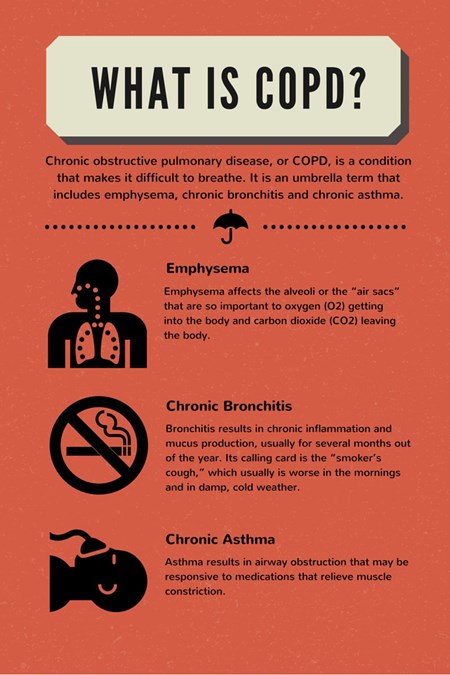 Other risk factors for COPD include a family history and exposure to secondhand smoke or other air pollution, chemical fumes or dust. People with asthma and preterm babies also are at a greater risk for getting COPD later in life.

However, a vast majority – about 90 percent – of people with COPD are current or former smokers, and about 20 percent of long-term smokers will go on to develop some form of COPD.

COPD takes many years to develop, which is why many patients do not report symptoms until after age 40. The main symptoms of COPD include:

As COPD progresses, you may begin to feel out of breath even during simple activities, such as walking, cooking, cleaning, getting dressed or even bathing.

“These tasks that were so easy to do before now drain your energy level,” says Jo Ann Ikehara, a pulmonary function tech with Respiratory Care Services at Pali Momi Medical Center.

“Most people attribute this to ‘getting old’ and adjust accordingly by avoiding those activities that bring on the symptoms,” Ikehara says. “This is not good, because you risk your muscles becoming weak and you become more breathless due to deconditioning.”

Many people with advanced COPD lose weight and become weak because it takes so much effort to eat (breathing alone burns 10 times more calories than it used to) and because too much food in the stomach decreases the amount of room the lungs have to expand.

Severe flare-ups, called COPD exacerbation, also occur in the later stages of COPD and can range from mild to life-threatening.

“COPD exacerbations or flare-ups should be avoided, for these can lead to pneumonia and additional weakening of the lungs,” Ikehara warns.

Signs that a flare-up is coming include:

Consult your doctor early regarding these changes.

“Your doctor should be consulted because shortness of breath can be caused by a lung problem, a heart problem or a combination of both,” Ikehara explains. “By determining which is causing the symptoms, a doctor can determine the best treatment plan for you.”

COPD can be a debilitating disease, but, if diagnosed properly, treatment is available to help improve symptoms for most people.

Continuing to smoke only speeds up lung loss and worsens symptoms.

Establish a safe exercise program that incorporates Pursed-Lip Breathing (PLB) techniques. Pace yourself so as not to get too tired. Always consult with your doctor.

Some folks can benefit from weight loss, while others may require special supplementation because of eating difficulty caused by breathlessness.

Avoid crowds during cold and flu season. Steer clear of friends and family members who are sick. Take medications as directed, including oxygen therapy, if prescribed.