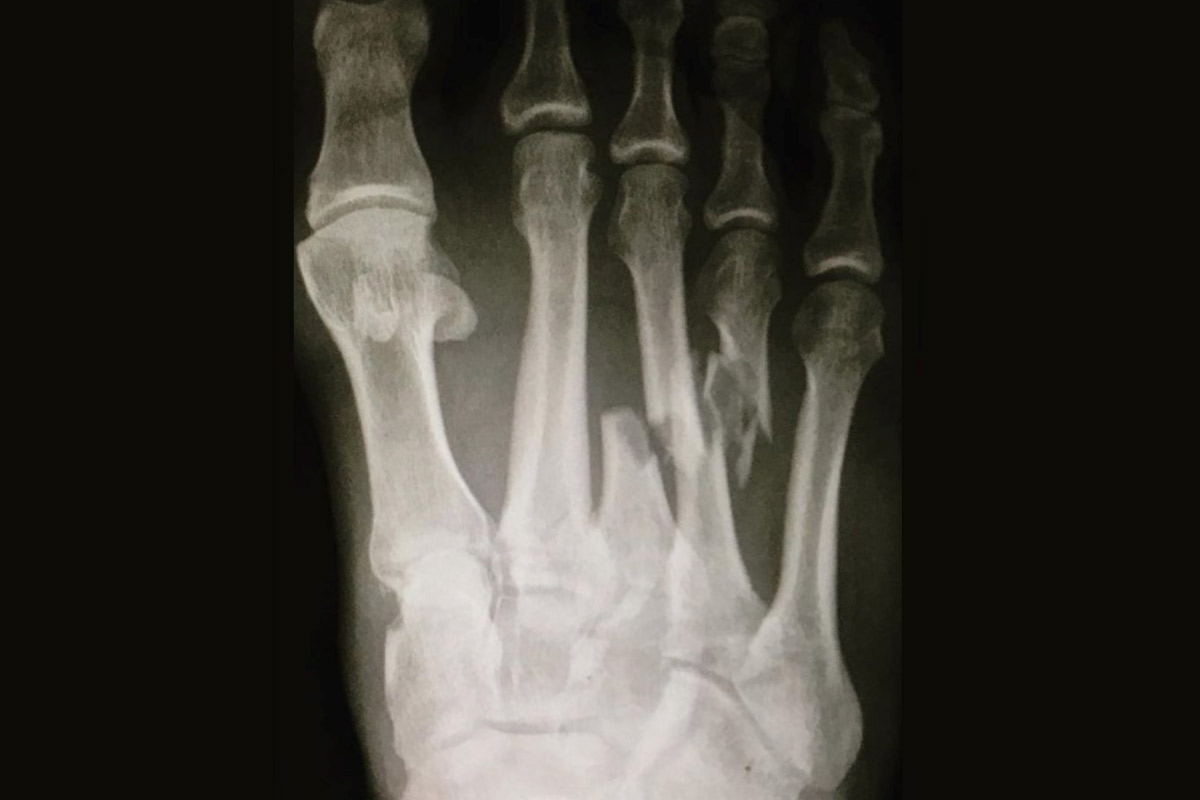 "You ever folded your entire foot backwards?" That's what the 11-time world champion surfer asked followers on Instagram shortly after suffering this gruesome foot injury. Photo courtesy of @kellyslater/Instagram

During a free surf in July 2017 at Jeffrey’s Bay, South Africa, Kelly Slater had a horrific foot injury.

Slater said he, “pulled into a barrel … and the whitewash bounced the board back into my foot as I hit the closeout, taking all the pressure into the metatarsals.”

In other words, he folded his right foot backward in the middle of the foot.

To an untrained eye, it may have looked as if he only fractured two bones in the middle of his foot. If those bones (known as the 3rd and 4th metatarsal shafts) were injured alone, Slater could have potentially been back on his board in six to eight weeks.

However, the injury was much worse.

Instead, he also injured the bones and ligaments involving the 1st and 2nd metatarsal-cuneiform joints of the Lisfranc (or midfoot) joint.

This is a relatively common, and sometimes career-ending injury in the NFL.

There are actually multiple joints in the Lisfranc joint, with five metatarsal bones, three cuneiform bones and a cuboid bone.

There also is a strong ligament connecting the medial cuneiform and 2nd metatarsal base called the Lisfranc ligament.

When the Lisfranc ligament and other ligaments of the Lisfranc joint are injured, the bones of this joint become unstable. This instability, even with just millimeters of displacement, can cause severe pain, and will lead to arthritis and an even more painful foot with deformity if not treated surgically. 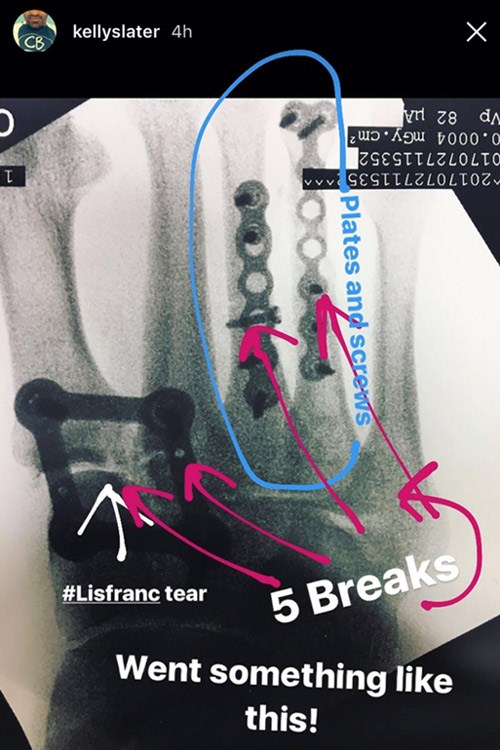 More Than a Sprain

When someone injures the middle part of the foot, it is common to brush it off as a bad sprain. However, these are injuries that need a closer look to determine if the ligaments are injured.

If there are no obvious fractures, the imaging studies might look normal unless it is a weight-bearing X-ray, CT scan or MRI.

Consequently, the Lisfranc sprain/dislocation/subluxation, which is way worse than an isolated metatarsal fracture, is commonly missed. When the injury is missed, it may result in permanent damage to the foot, an inability to return to sport, and eventually will lead to a surgical fusion of the bones.

In Slater’s situation, he needed an open reduction and internal fixation (ORIF) of the Lisfranc joint as well as the 3rd and 4th metatarsals. Because the plate is used to temporarily hold the bones of the Lisfranc joint in place while the ligaments heal, it is actually critical to remove the trapezoidal-looking plate so the joint can function properly.

I typically take these out at three months after surgery.

The fact that Slater was surfing Pipe as well as he did, with this plate still in his foot a little more than four months after surgery is nothing short of amazing. You could tell he had a little more difficulty with his toe side turns and pumping, and he was nowhere near 100 percent – but a 60-70 percent Kelly Slater is pretty darn good.

Can’t wait to see how he does after the Lisfranc plate is taken out.

The surgeon will likely remove the plates over the 3rd and 4th metatarsals as well, but that is not as critical.

Unfortunately, after removing the plate, he’ll likely be out of the water for about four weeks. Personally, I hope Slater stays on tour.

Best of luck, Kelly, on your recovery!

Board certified in orthopedics, Dr. Spencer Chang specializes in the treatment of upper and lower extremity sports injuries, as well as foot and ankle problems.