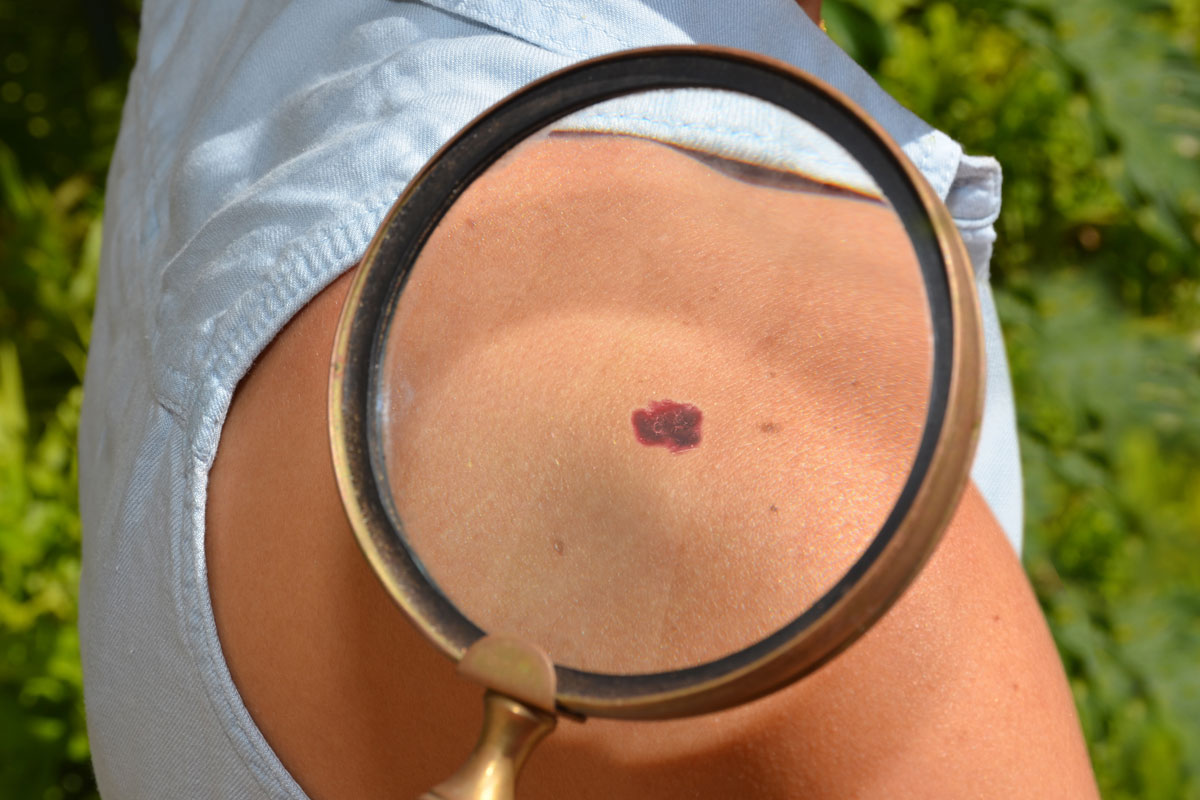 Skin cancers are the most common type of cancer in the world and account for approximately 75 percent of all cancer diagnoses.

The main cause of skin cancer is overexposure to sunlight, which contains ultraviolet (UV) rays that can alter the genetic material in skin cells. Sunlamps and tanning booths also generate UV rays that can damage skin and cause skin cancers.

Melanoma starts from mutations in skin cells, called melanocytes, and can spread throughout the body. It often appears first on areas regularly exposed to sunlight, such as the arms, legs, chest or back. However, melanoma occasionally can be found on other, less exposed areas of the body, including on the palms of the hands or soles of the feet; under a fingernail or toenail; in the mucus linings of the mouth, vagina or anus; and even in the eye or inside the nostril.

Infrequent but excessive sun exposure that causes scorching sunburns is associated with melanoma. In fact, just one blistering sunburn during childhood is linked to doubling a person’s risk for developing melanoma later in life.

Melanoma usually is curable if treated early, but it has the potential to become life-threatening.

Melanoma behaves more aggressively than other types of skin cancers and can travel beyond the skin to affect other parts of the body, including the bones and brain.

Once melanoma spreads to this point, it becomes very difficult to treat and may be incurable.

Basal and squamous cell carcinomas are more common than melanoma. They progress slowly and rarely spread beyond the skin.

Basal cell carcinoma accounts for nearly 75 percent of all skin cancers and is the slowest growing. Squamous cell carcinoma is somewhat more aggressive and more inclined to spread.

Some noncancerous skin growths can become cancerous. The most common are actinic keratoses – rough, scaly, pink or red lesions found on sun-exposed skin that may scratch off but usually grow back.

Skin cancer is about three times more common in men than in women. Most people are diagnosed between the ages of 45 and 54; however, the incidence of skin cancer is rising, especially among young people.

Fair-skinned individuals – especially redheads, blue-eyed blonds and those born with a pigment disorder, like albinism – are most vulnerable to skin cancer because they have the least amount of melanin in their skin. People with lots of freckles or moles may be more susceptible to melanoma.

People with darker skin are less likely to develop skin cancer; however, having darker skin does not preclude one from developing skin cancer. When melanoma is found in darker-skinned individuals, it often is discovered at a later stage and is harder to treat.

Most cases of skin cancer are curable and can be prevented by limiting the skin’s exposure to UV radiation. The incidence of skin cancer is higher in places like Hawaii where there is intense sunshine year-round.