A week into the new year, Jamelia Paio took her son, Liam, to a physician to check on a fever the 17-month-old had. The doctor chalked it up to the toddler starting to teeth, and the family went home.

The next day Jamelia noticed Liam was unusually tired, but again, thought it was related to the poor sleep he had gotten the past few nights.

But as the morning went on, Liam ate very little, and only drank small sips of water before falling back asleep.

When he woke up from yet another nap that afternoon, Jamelia saw his eyes were turning yellow.

It was then she knew her son needed to go to the hospital. 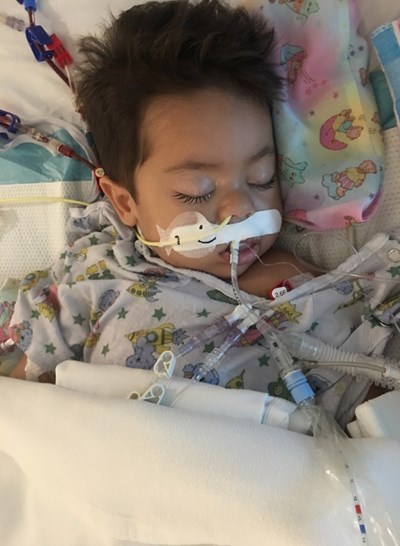 When they arrived at Kona Hospital, doctors discovered Liam’s heart rate was elevated and that he was gasping for air.

Tests revealed Liam had bacterial pneumonia, but there were some things on the results that didn’t make sense, so Liam and Jamelia were medivacked to Kapiolani Medical Center for Women & Children.

Once at the Oahu medical center, Liam underwent more testing, which showed in addition to the bacterial pneumonia, his hemoglobin and platelet levels were severely low, and his white blood cell count was high.

I remember standing there listening to the doctor tell me all the options and just being stunned."

Later that morning, doctors gave Jamelia the news that it was suspected Liam may have hemolytic uremic syndrome.

“Basically, he was in kidney failure,” Jamelia says. “I remember standing there listening to the doctor tell me all the options and just being stunned. How? Why? Why him? I just didn’t understand.” 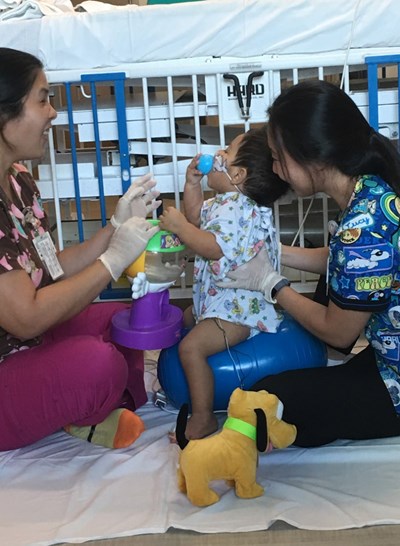 Doctors told Jamelia that Liam’s heart had been in overdrive the past few days, and that to help it recover, they would need to put Liam into a medically induced coma and start him on continuous renal replacement therapy.

“I cried and cried. That day I had to sign papers no parent should have to sign,” Jamelia says. “Liam’s sister and dad were on the Big Island, and that day I had to call them and tell them to say goodbye to Liam and that it might be their last time. I was heartbroken – we all were.”

Liam remained in the Pediatric Intensive Care Unit on continuous dialysis for more than a month, during which time his pneumonia necrotized and began draining fluid into the cavity beside his lungs.

That day I had to call them and tell them to say goodbye to Liam and that it might be their last time. I was heartbroken – we all were.”

This new development required Liam have a chest tube inserted to help with his breathing.

“After a month-and-a-half, the doctors decided to try and wake Liam up and see how he did,” Jamelia says. “The nurse who extubated him was named Patrick – he was the first person Liam saw as he woke up.”

Jamelia says that during the three weeks Liam was an inpatient in the Carter Unit, he and Patrick grew even closer.

“To this day, anytime Liam sees ‘Uncle’ Patrick, it's like not a day went by since they last saw each other. Patrick was always there for Liam, for me and for my family. It is because of him our transition to Carter Unit, and eventually home, was as smooth as it could be,” Jamelia says. “We have bonded with him and the love, support, and aloha he shared with us.”

Nearly three months after the beginning of his ordeal, Liam was well enough to go home.

Today, he is an outgoing, rambunctious 2-year-old known as “The Miracle Baby.”

“To know what he overcame, it’s beyond us all!” Jamelia says, adding that Liam continues to visit Kapiolani every three months for follow-up appointments.

“Nephrology doctors say it will take six months to a year to see how his kidneys heal, but he is a happy, silly, crazy, loving little kid,” his mom reports.

Know that the impossible is possible – keep holding on to the future, to your dreams, because this – whatever you are going through, will be a part of a bigger story.”

While Liam was in the medical center, Jamelia turned to the Wall of Hope for inspiration.

“Every time I would pass it, I would read and re-read each story and see all the different things that others have overcome. It gave me hope,” she says.

Now that it is her turn, Jamelia offers these words of strength and courage for others who may be facing uncertainty:

“Know that the impossible is possible – keep holding on to the future, to your dreams, because this – whatever you are going through, will be a part of a bigger story.”