“The only safe thing is to take a chance.” – Mike Nichols 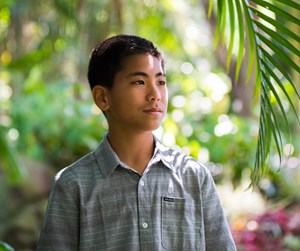 When Keao Miyahira was 3 years old, he began to exhibit symptoms of Kawasaki disease, a rare illness that can harm the arteries that carry blood to the heart.

Symptoms can include a fever, red eyes, body rash and a swollen, sensitive, bright-red “strawberry tongue.”

Keao received the standard treatment for Kawasaki disease – a six-hour IV infusion and scheduled aspirin treatment – before being discharged. However, he relapsed and had to be directly admitted to the medical center.

“On our first admission, world-renowned Kawasaki disease expert Dr. Marian Melish was out of town attending a Kawasaki conference. On our second admission, Dr. Melish had returned, and she informed us that if Keao’s fever was not cured within a week, he could suffer life-threatening complications, like aortic stenosis,” says Keao’s father, Asa.

“We were very scared and worried, but Dr. Melish’s expertise in Kawasaki gave us confidence that Keao could be cured,” says Asa.

The treatment worked, and today Keao is a happy, healthy 13-year-old who enjoys playing sports and is very active.

“Our family is doing well and relieved that Keao has no side effects from Kawasaki disease,” Asa says. “Drs. Yamamoto and Melish were fantastic! You are in very good hands with Dr. Melish. We know so many other people like our son who have overcome Kawasaki disease and live very active and healthy lives today.”