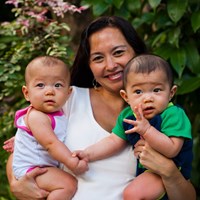 Going into her second pregnancy, this time with twins, Joanna knew things likely wouldn't be easy.

Joanna had suffered preeclampsia when she was pregnant with her daughter and, as a result, had lost her vision temporarily. So when Joanna tested positive for gestational diabetes and HELLP syndrome, a life-threatening complication closely aligned to preeclampsia, doctors knew they had to act fast.

The biggest concern with HELLP syndrome is a low platelet count, which puts the mother at high risk for profuse bleeding and damage to the liver during delivery.

The only treatment for HELLP is an emergency C-section.

At 34 weeks, Joanna delivered fraternal twins, Alexis and Lando, who were immediately sent for care in the Neonatal Intensive Care Unit.

Unfortunately, because Joanna had developed the flu, she had to be quarantined from her twins for the first two weeks of their lives.

"It was extremely hard not to be able to see them or hold them," Joanna remembers. "Even though my husband would take pictures and I'd get daily updates from the doctors, it wasn't the same."

Thankfully, once the two weeks were up, Joanna was reunited with her newborns, who were able to go home with her shortly thereafter.

Today, Joanna is a busy mom of three healthy keiki.