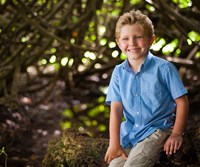 Usually a superhero never reveals his true identity, but Alexander "Z-Man" Schulte is more than happy to share his story with others.

When Z was 3 years old, he was diagnosed with stage 3 anaplastic large cell lymphoma following a long seven months of illness.

"As a mother, I knew he was failing, but as the time passed I became so fearful that he wouldn't be diagnosed until it was too late. When Dr. Glasser finally told me he had cancer, I took a deep breath and said, 'Well, what do we do now?'" says super-mom Nicole Schulte.

Z qualified for a clinical trial and received six rounds of very potent chemotherapy at Kapiolani Medical Center for Women & Children. Each round consisted of one week of inpatient hospitalization due to the intensive treatment for his cancer.

"During Z's treatments, donations rolled in to our family from friends. However, we wanted to give back to the not-for-profit hospital that took such good care of all of us," Nicole shares.

Team Z raised more than $28,000 in donations for Kapiolani, which Z-Man knows will be put to good use helping so many other children facing life-threatening challenges.

"Z says if he was a superhero, he would cure cancer for everyone," Nicole says.

Z recently reached a major milestone in October 2016 when he celebrated one year of being cancer-free.

He also started kindergarten at Mililani Ike Elementary and loves to swim, dance and play with his little brother, Christian.

"Words cannot express how grateful I am to everyone who was involved in curing Z's cancer," Nicole says. "Kapiolani will forever be part of our ohana!"