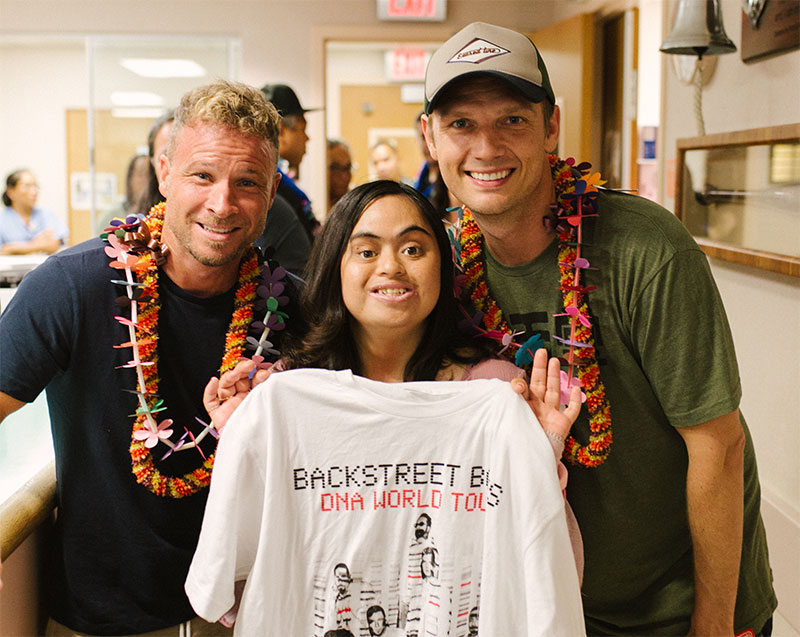 The Backstreet Boys demonstrated the shape of their hearts along with their aloha spirit during a surprise visit to Kapiolani Medical Center for Women & Children, Hawaii’s only Children’s Miracle Network (CMN) hospital. Despite being on the road and performing nonstop for their DNA World Tour the last six months, the iconic ‘90s music group makes time to give back. Group members Nick Carter and Brian Littrell stopped by Kapiolani right before their Nov. 5 concert at the Blaisdell Arena to personally meet with patients and families. It was especially meaningful for one super fan who reached an important medical milestone last week after more than two years of cancer treatment.

The Backstreet Boys surprised pediatric cancer patient Jordan Ilae for her end-of-chemotherapy celebration. The group joined the pediatric oncology staff for this special presentation that all pediatric cancer patients at Kapiolani experience to signify the last of their chemotherapy treatments. The ceremony includes the singing of “Happy Last Chemo” by doctors and nurses, a presentation of a small gift and the ringing of the bell by the patient themselves. The bell sounds off the triumphant accomplishment of treatment and the strong fight against cancer. The bell was established at Kapiolani by newly crowned World Series Champion and Washington Nationals Catcher Kurt Suzuki. The Maui native is a committed annual donor to the Kapiolani Cancer Care Fund.

After Jordan and her mom, Kahea, rang the bell, members of the Backstreet Boys made this ceremony unique by giving Jordan additional gifts from their DNA World Tour. The gifts included an autographed Backstreet Boys shirt, poster and other tour keepsakes. They also presented concert tickets for Jordan to attend the final Backstreet Boys performance in Honolulu on Nov. 6. Children’s Miracle Network Hospitals national partner iHeart Radio also gifted Jordan additional tickets so that her entire family can go to the concert with her.

Jordan has loved the Backstreet Boys music for years. She even performs to the group’s songs with her dance friends who call themselves “The Heartbeat.” Kapiolani staff and her family credit Backstreet Boys’ songs for inspiring Jordan to complete her treatment. After chemotherapy, patients need to keep moving to help flush the medicine out of their system, and a playlist of Backstreet Boys songs provided the motivation Jordan needed to walk around, or even dance, following her treatment. Her favorite song to play first, and maybe more than once, was “I Want it That Way.”

“I'm super excited for her because it's been a rough couple of years,” said Kahea Ilae, Jordan’s mother. “I mean when people are pumped with the chemo, they just don't feel good. But in order for her to be discharged, she had to clear chemo. So that was our way of getting her out of bed and going for walks, having her listen to the Backstreet Boys. It was really cute because she would sing along with it, while she was walking, and the nurses would be like, ‘Is that the Backstreet Boys?’”

Besides Jordan’s celebration, the Backstreet Boys did individual patient room meet-and-greets. They also stopped by Brain Station, which is an educational program at Kapiolani that helps hospitalized children keep up with schoolwork. Part of today’s Brain Station lesson for the patients was learning the history of the Backstreet Boys. They also used the opportunity to teach about genetic DNA in honor of the group’s DNA World Tour.

“Everybody deserves to hope in something, to believe in something,” said Brian. “We hear a lot of times that Backstreet Boys music has been the soundtrack to so many people’s lives. For us to be here physically is a testament to what we do. We’re able to give back and lift some spirits. It’s why we do it – it blesses us more than it does anybody else.”

The visit to Kapiolani, Hawaii’s only maternity, newborn and pediatric specialty hospital, hits close to home for the band as all five members are fathers. Brian shared with staff that he was born with a heart defect and received care at a Children’s Miracle Network hospital while Nick talked about being a proud dad of two with the birth of his newborn daughter, Saoirse.

“We get so much out of this. We have families – we all have children – and we’ve been doing this for 26 years, so just to be able to give back, and to give back and uplift spirits through music, that’s really why we’re here,” said Nick.

The Backstreet Boys – made up of members Nick Carter, Brian Littrell, Howie Dorough, AJ McLean and Kevin Richardson — formed in 1993 and rose to fame with their debut album, “Backstreet Boys.” Since their debut, they have become one of the best-selling boy bands of all time, with more than 130 million records sold worldwide. The band is currently in the middle of their four-concert series in Hawai‘i, which is part of the band’s DNA World Tour.