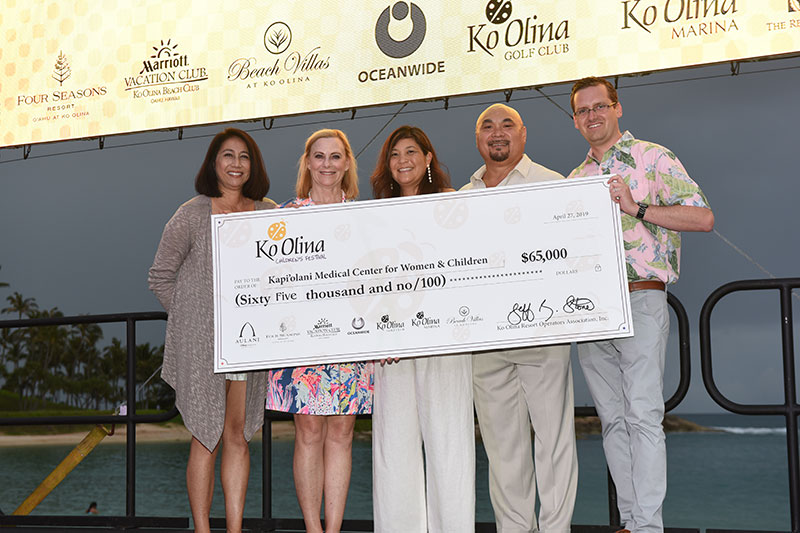 A superhero-themed festival at Ko Olina Resort proved to be empowering for kids of all ages! The sixth annual Ko Olina Children’s Festival drew more than 2,000 people and, besides every facet of the festival having a superhero touch, the proceeds will make a great impact on the care at Kapiolani Medical Center for Women & Children. This year, Ko Olina’s $65,000 gift to Kapiolani came from contributions from the resort’s marketing association and 100% of event ticket sales.

Funds from this annual festival support Kapiolani’s efforts to provide health care services and specialized programs for women and children regardless of a family’s ability to pay. Over the past six years, a total of $340,000 has been raised by the Ko Olina Children’s Festival to benefit Kapiolani, Hawaii’s only maternity, newborn and pediatric specialty hospital. As a not-for-profit medical center and Hawaii’s only Children’s Miracle Network Hospital, Kapiolani treats keiki no matter their illness or injury.

Heroes come in many forms and the festival also featured “Hometown Heroes,” including the Honolulu Police Department, Honolulu Fire Department, Honolulu Ocean Safety & Lifeguard Services, U.S. Navy SEALs, Hawaii-grown martial artists and Westside MMA fighters. The “super” theme of the Children’s Festival featured an opportunity for keiki to participate in a 10-minute Navy SEALs boot camp, cook with Aulani’s Chef Kyle Higa, meet the creative team behind Mana Comics and celebrate their own superheroes with a variety of arts and crafts activities, including power-arm tattooing and a superhero photo booth at the Four Seasons Resort’s Camp Kohola Aqua Hut.

Live demonstrations by the Nito Boxing Academy and Hawaii Elite MMA, a special mini-concert from the Tonga Sisters, an assortment of food vendors, family-friendly activities and hundreds of glow-in-the-dark wands lighting up the night sky all made for a fun-filled day with something for everyone. The event’s superhero festivities were capped off with the sunset viewing of Disney•PIXAR’s “Incredibles 2” on the beach.

“The Ko Olina Children’s Festival was created to give our local keiki a platform to share their talents,” said Jeffrey R. Stone, president of Ko Olina Resort Operators Association and CEO of The Resort Group. “I am humbled to see how much the festival has grown and how our partnership with Kapiolani Medical Center for Women & Children has inspired such a rewarding event that the community can enjoy. Kapiolani plays a vital role in ensuring the well-being of Hawaii’s women, children and families, and we are grateful for all our sponsors and attendees who make this donation possible.”

An ongoing tradition of the festival line-up is for keiki to learn about Hawaiian culture and learn to dance hula alongside popular Disney characters at Aulani’s Ohana Hula Show. Attendees also had a chance to play along to favorite kids’ songs with the Hawaii Youth Percussion Ensemble (HYPE), learn Sun & Beach Safety tips with Kapiolani Medical Center, and enjoy face-painting and tattoos by Cutie Cake Face and Aloha Glitter Tattoos and creations by balloon artists from Balloon Monsoon.

“The Ko Olina Children’s Festival has grown to become a family-favorite event for West Oahu,” said Kapiolani CEO Martha Smith. “We’re so proud to partner with the Ko Olina Resort Association and be involved with an event that embraces ohana and cares about kids. The generosity of Jeff Stone, all of Ko Olina’s resort partners, festival sponsors and event attendees is inspiring. It’s very special how the Ko Olina Children’s Festival brings the community together to build awareness and support for Kapiolani.”

Photo Caption:
Pictured on stage for the check presentation are (left to right):

About Kapiolani Medical Center for Women & Children
Kapiolani Medical Center for Women & Children is Hawaii’s only maternity, newborn and pediatric specialty hospital. It is well recognized as Hawaii’s leader in the care of women, infants and children. With 253 beds, the not-for-profit hospital delivers more than 6,000 babies a year, and is also a medical teaching and research facility. Specialty services for patients throughout Hawaii and the Pacific region include intensive care for infants and children, 24-hour emergency pediatric and adult care, critical care air transport and high-risk perinatal care. More than 1,700 employees and approximately 600 physicians provide specialty care at Kapiolani. The hospital is home to the Kapiolani Women’s Center and the Women’s Cancer Center, and offers numerous community programs and services, such as specialty pediatric clinics and the Sex Abuse Treatment Center. Kapiolani is an affiliate of Hawaii Pacific Health, one of the state’s largest health care systems and a not-for-profit health care organization with over 70 locations statewide including medical centers, clinics, physicians and other caregivers serving Hawaii and the Pacific region with high quality, compassionate care. In addition to Kapiolani, Hawaii Pacific Health includes Pali Momi Medical Center, Straub Medical Center and Wilcox Medical Center. Learn more at Kapiolani.org.