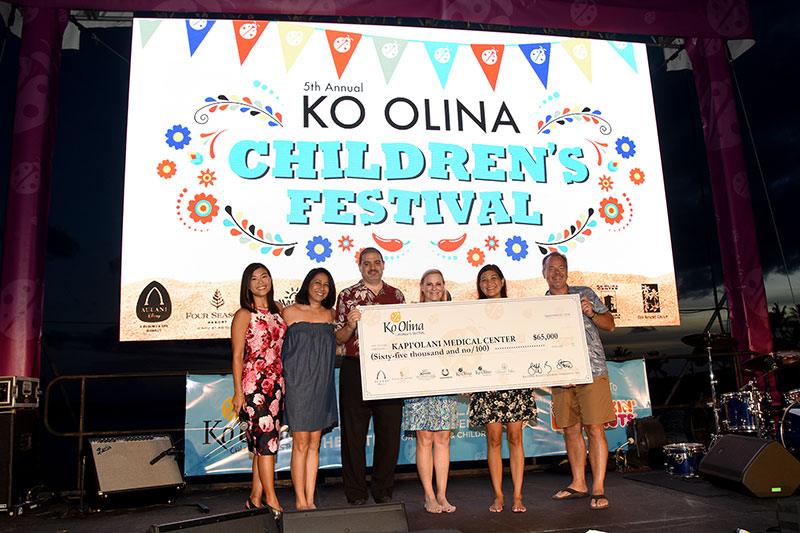 Hundreds of glow-in-the-dark maracas waving in the air were quite a sight and a festive sound for the big finale of the fifth annual Ko Olina Children’s Festival. That was the look and feel for the sunset viewing of “Coco,” a Disney•PIXAR movie, on the beach. The family-friendly event was one big fiesta with the inspired Dia de los Muertos celebration that included everything from a mariachi band to sugar skull cookie decorating. The benefit event for Kapiolani Medical Center for Women & Children was held Saturday, Sept. 22, drawing more than 2,000 people for activities and entertainment.

Contributions from the Ko Olina Resort Association along with 100 percent of proceeds from ticket sales resulted in a $65,000 donation presented to Kapiolani at the event, which is the highest amount raised in the event’s five-year history. Funds from this annual festival support Kapiolani’s efforts to provide health care services and specialized programs for women and children regardless of a family’s ability to pay. Over the past five years, a total of $275,000 has been raised by the Ko Olina Children’s Festival for Kapiolani to help support Hawaii’s only maternity, newborn and pediatric specialty hospital. As a not-for-profit medical center, Kapiolani treats keiki no matter their illness or injury.

“The Ko Olina Children’s Festival was created to inspire and celebrate the creativity in our children,” said Jeffrey R. Stone, president of Ko Olina Resort Association and CEO of The Resort Group. “Kapiolani Medical Center for Women & Children strives to provide the best medical care possible for our keiki and their ohana, and we share their commitment to our community. We thank the attendees for their support of this festival and making this significant gift possible.”

Keeping in the “Coco” theme, the Children’s Festival featured an opportunity for keiki to slime it up with Pow! Wow! Hawaii founder Jasper Wong, cook with Aulani’s Chef Kyle Higa, and celebrate Dia de los Muertos with a variety of arts and crafts activities, including decorating sugar skulls and skull masks with Four Seasons Resort’s Kids for All Seasons team.

“Kapiolani’s commitment to provide keiki with specialized medical care regardless of a family’s ability to pay is certainly made possible by ongoing contributions from the Ko Olina Children’s Festival,” said Kapiolani CEO Martha Smith. “The support of Jeff Stone, the Ko Olina Resort Association, festival sponsors and attendees of this event is awe-inspiring! As a not-for-profit medical center, our needs are never-ending, and we rely on community support to help us fulfill our mission to create a healthier Hawaii.”

PHOTO CAPTION:  Pictured on stage for the check presentation are (left to right):