Kayle will serve as Hawaii's ambassador through the national program supported by Ace Hardware, Delta and Marriott International 05/14/2018 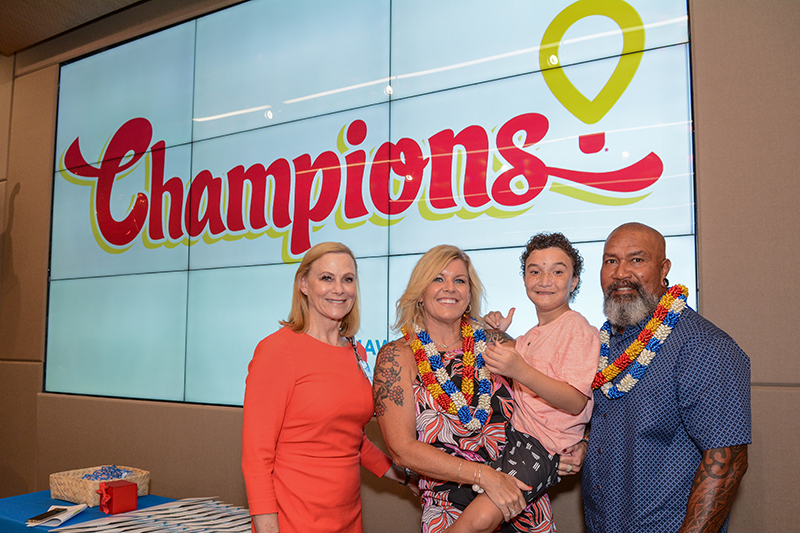 Living with a positive attitude no matter the challenge is how Kayle Osai approaches each day. This is the message Kayle’s family will share with patients, families and the community in his role as Hawaii’s 2018 Children’s Miracle Network Hospitals Champion.

When Kayle was a year old, his mother, Melissa, insisted her son receive genetic testing as she felt something was not right. Kayle’s tests showed that he had a chromosome 17 deletion and duplication.

“When we moved to Hawaii and made an appointment at Kapiolani, they did further genetic testing and discovered that he also had Carney complex,” said Melissa Osai.

Carney complex is a condition that puts individuals at an increased risk of developing benign tumors in the heart and other parts of the body. Due to his condition, Kayle has received numerous medical procedures at Kapiolani.

CMN Hospitals names a “Champion” ambassador for each member hospital, including Kapiolani. In this role, Champions share their powerful stories throughout the year. As pediatric patients who have triumphed despite several medical challenges, they truly help to illustrate why children’s hospitals need local charitable support.

These incredible ambassadors, like Kayle, represent the 10 million kids treated at CMN Hospitals every year. Kayle’s story will be shared locally and nationally as part of the ongoing efforts by CMN Hospitals to show the impact donations make to care for children, no matter their illness or injury.

“Kapiolani has been Hawaii’s only Children’s Miracle Network hospital for more than 20 years. The money raised through this partnership helps fund many of our patient support services and programs, such as our Child Life program, chaplaincy program and critical care transport services,” said Kapiolani CEO Martha Smith. “Kayle’s condition has led him to see almost every Kapiolani specialist. The Osai family knows our medical center inside and out. They will share a great perspective of our work and be an amazing Champion family for Kapiolani.”

As a result of his condition, Kayle will need to be monitored for tumors for the rest of his life. His medical condition has also contributed to other health challenges, including hearing impairment, global developmental delay, autism and scoliosis.

“Ever since we moved here, every subspecialty doctor that he has, they know exactly who he is, who we are, what’s going on with him,” Melissa said. “I can see them in the hallway and they can stop me and I can stop them and say ‘Hey, I have a question,’ and they will stop and answer it. A lot of doctors in big hospitals on the mainland don’t do that. Kayle has had such outstanding care at Kapiolani and I am so grateful for all the doctors that have been a part of our life since he was three.”

“I think Kayle’s a perfect example of Kapiolani’s comprehensive efforts because he is medically complex,” said Dr. Jeremy King, Kapiolani pediatric gastroenterologist. “A lot of different specialists have to coordinate their care to have a good outcome. We work together in order to achieve that.”

“Kayle and his parents are really great champions for Kapiolani,” said Dr. Russell Woo, Kapiolani pediatric surgeon. “Kayle struggles with so many medical issues and requires so much care, but when we see them they’re so positive and they’re always calm. It’s really amazing how strong the Osai family is in the face of so much adversity.”

CMN Hospitals are dedicated to providing specialized medical care to children regardless of their ability to pay. Gifts made in Hawaii stay in Hawaii, with 100 percent of the funds going to help our local keiki at Kapiolani.

“No matter what he goes through in every hospital, every situation, he will always greet everybody with a smile, aloha, or ‘I love you.’ He’s happy all the time,” Melissa said. “And that’s been the best thing about being with him because he is in love with life. If only all of us could be like that.”