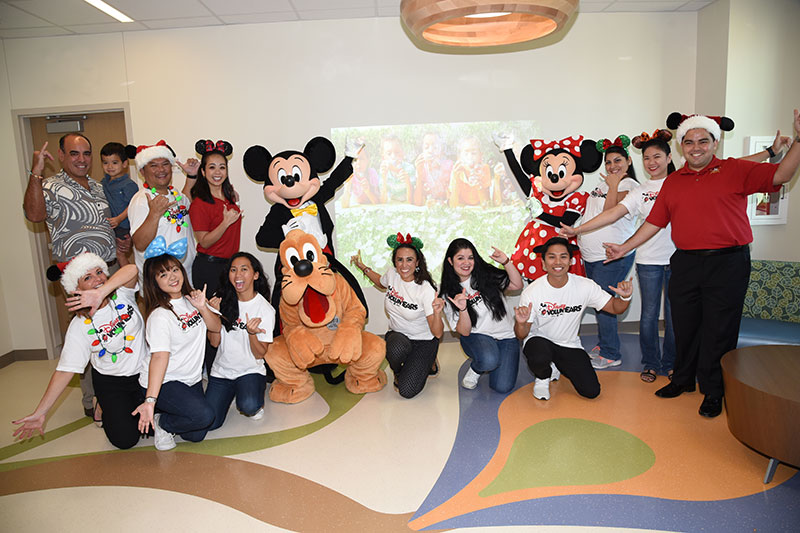 Mickey Mouse, Minnie Mouse and Pluto made a special appearance at Kapiolani Medical Center for Women & Children this week to bring some Disney magic and holiday cheer to pediatric patients, families and staff. The friends from Aulani, A Disney Resort & Spa in Ko Olina, posed for photos as they visited with patients and staff throughout the hospital.

In addition to visiting the pediatric patients, the Disney friends made a special trip to the Keiki Play Area in the new Diamond Head Tower that is named for Aulani. The Walt Disney Company generously donated to Kapiolani’s Campaign for Hawaii’s Children to sponsor the activity area with an interactive digital projector located in the lobby on the third floor. While waiting during hospital visits, children can enjoy a special interactive experience with images projected on the wall that move when touched. For example, touching an image of fishes in the ocean makes them swim.

“At Aulani, we provide experiences that allow families from all over the world to create memories together every day,” said Elliot Mills, vice president of hotel operations for Aulani, a Disney Resort & Spa and Disneyland Resort. “We are so pleased to share this same magic with our community – particularly our local keiki and their families during times of need.”

“We are very grateful for the ongoing support we continue to receive from The Walt Disney Company,” said Kapiolani CEO Martha Smith. “Their generosity helped us achieve a significant milestone for our medical center with the completion and opening of our new Diamond Head Tower, and their regular hospital visits bring many smiles to our patients, families and staff.”

To support a multi-phase rebuild and expansion of the hospital, the Kapiolani Health Foundation reached out to the community for its largest capital campaign. The Campaign for Hawaii’s Children raised more than $34 million for the first phase of construction. As a not-for-profit medical center, Kapiolani relies on the generosity of individuals and organizations like Aulani to fulfill its mission and to serve every patient regardless of their ability to pay.

See more photos from the visit on Kapiolani's Facebook page.