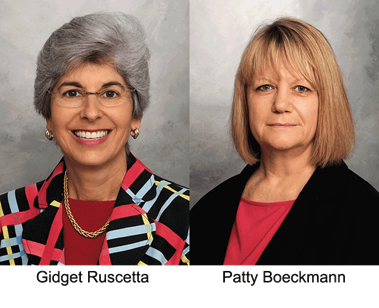 “I am excited about this new team and look forward to working together with Gidget and Patty in their new leadership positions as chief operating officers of their respective facilities,” said Gladstone. “They both have many years of experience in clinic and hospital operations, strategic planning, and physician relations. During their time at Hawaii Pacific Health, they have demonstrated they have the knowledge, skill and dedication to help us build upon the outstanding programs and services already in place at Pali Momi and Straub.”

Ruscetta was promoted to Pali Momi chief operating officer from her position as vice president of hospital operations for Kapiolani Medical Center for Women & Children where she oversaw daily hospital operations, including Kapiolani’s women’s center, ambulatory cancer center and the facility’s two most prominent community-service programs that involve child protection and sex abuse. Previously, she was with the Nemours Children’s Clinic in Florida where she managed clinical and business operations for that facility’s inpatient and outpatient services and its Arnold Palmer Heart Institute. Ruscetta’s community involvement includes serving on the Arthritis Foundation board and as president of the Hawaii Chapter of the American College of Healthcare Executives.

Boeckmann was promoted to chief operating officer for Straub Clinic & Hospital from her position as vice president of hospital operations and chief nurse executive. During her time at Straub, Boeckmann has worked effectively on hospital operations, helped to develop and foster Straub’s culture of quality and service excellence, and contributed to stronger physician relations that include recruiting and retaining key physicians and growing volume through community referrals. In her expanded role as COO, Boeckmann will now also provide oversight to all of Straub’s satellite clinics. Previously, she was with Allina Health in Minneapolis, Minnesota, where she served in hospital and system executive roles and had accountability for hospital inpatient and outpatient operations, business development, strategy and physician relations.