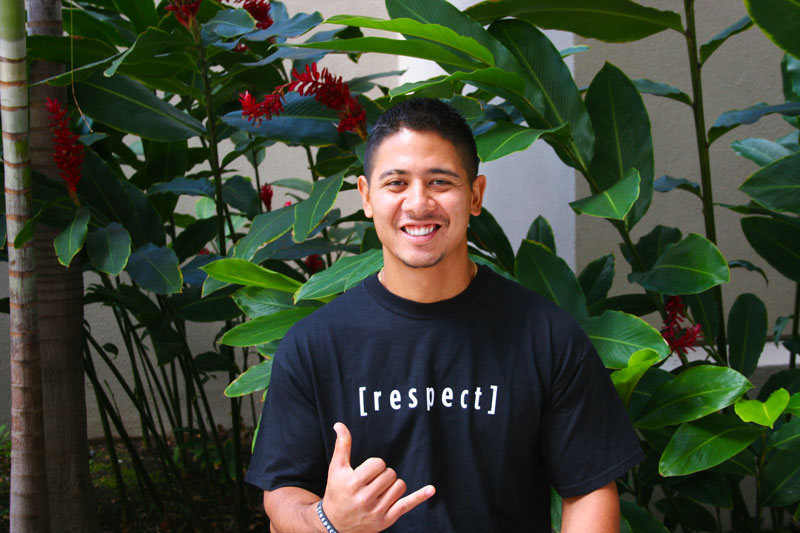 Live life from a place of [respect], prevent sexual violence, join the movement. These messages are part of the [respect]™ campaign, a call to action by the Sex Abuse Treatment Center (SATC), a program of Kapiolani Medical Center for Women & Children, that promotes positive steps youth and young adults can take to prevent sexual violence, such as engaging in healthy communication, seeking consent, and intervening as concerned bystanders.

SATC is partnering with various businesses and organizations, including schools, bars, and universities, to promote healthy, respectful relationships during the month of April, which is Sexual Assault Awareness Month (SAAM).

“Respect starts with clear communication and mutual consent. Without respect, sexual activity could cross into sexual violence,” said SATC Executive Director Adriana Ramelli. “The goal of the [respect] campaign is to shape positive attitudes and behaviors, and promote action to prevent sexual violence.”

By joining forces with the University of Hawaii PAU Violence Program, the LGBTQ Community Action Team Against Sexual Violence, and local bars, SATC’s [respect] campaign will specifically target the strong link between alcohol and sexual violence. Alcohol is involved in over 50 percent of sexual assault cases.

Establishments such as Uncle Bo’s, Big Kahuna’s, J.J. Dolan’s, Tropics, Ba-Le Manoa Gardens, and Chiko’s are holding events throughout the month of April, proudly displaying the bold [respect] logo as a backdrop to promote sexual violence awareness and safety, and to educate patrons about things everyone can do to combat sexual violence.

SATC will also co-host the Second Annual Rally for [respect] with the Honolulu Theater for Youth. The rally brings together local artists and youth from around Oahu to participate in arts-based workshops designed to engage students in expressions of positive attitudes and healthy behaviors that prevent sexual violence. The workshops will be followed by live performances and a call to action for youth leaders to create a culture of [respect] in Hawaii.

Activities planned throughout April include:

Honolulu Theater for Youth Second Annual Rally for [respect]
Thursday, April 30, Tenney Theater, 3 – 8:30 p.m.
High school students and artists from around Oahu will take part in arts-based workshops around the theme of [respect]. Youth will use artistic expression for their vision for [respect]ful relationships and safe communities free from sexual violence. The creative experiences will culminate in a rally and call-to-action to create a culture of [respect] in Hawaii.

Proclamations
SATC was also recognized recently at a joint ceremony by the Honolulu City Council and Mayor Kirk Caldwell to proclaim the month of April as Sexual Assault Awareness Month. The proclamation recognized the work of SATC and other sexual assault programs on Oahu, including the military sexual assault programs and the Hawaii Coalition Against Sexual Assault.

About the Sex Abuse Treatment Center
The Sex Abuse Treatment Center (SATC), a program of Kapiolani Medical Center for Women & Children, is a statewide program valued for its leadership and expertise in providing treatment services for survivors of sexual assault, preventing sexual violence and effecting change through public policy, awareness and education. Its mission is to support the emotional healing process of those sexually assaulted in Hawaii, to increase community awareness about their needs and to reduce the incidence of all forms of sexual assault. It offers a 24-hour hotline at 808-524-7273, and information online at satchawaii.org.

Resources available on the SATC website include a complete list of services for victims of sexual assault, whether the abuse has just happened or has taken place sometime in the past, and support and prevention resources, including the “Start the Conversation” toolkit, designed to assist adults in starting conversations with youth about key topics such as teen dating abuse and staying safe online.

About Kapiolani Medical Center for Women & Children
Kapiolani Medical Center for Women & Children is well recognized as Hawaii’s leader in the care of women, infants and children. With 207 beds, the not-for-profit hospital is Hawaii’s only maternity, newborn and pediatric specialty hospital. It delivers 6,000 babies a year and is a tertiary care, medical teaching and research facility. Specialty services for patients throughout Hawaii and the Pacific Region include intensive care for infants and children, 24-hour emergency pediatric care, maternal fetal medicine, and high-risk perinatal care. More than 1,500 employees and more than 630 physicians provide specialty care at Kapiolani Medical Center. The hospital is home to Kapiolani Women’s Center and the Women’s Cancer Center – the state’s only dedicated breast health and gynecological cancer centers. Kapiolani offers numerous community programs and services, such as the Kapiolani Child Protection Center and Sex Abuse Treatment Center. Kapiolani Medical Center for Women & Children is an affiliate of Hawaii Pacific Health, the state’s largest health care provider. Learn more at kapiolani.org.